The Cavalla Volunteers and the Galveston Parks Board held the first Cavalla Bash at Seawolf Park. Volunteers came in from around the country to pitch in and repair Cavalla. Bar-b-que was served and all had a great time meeting and working together. Over sixty people attended this first Bash, including Jim Flanders, Renee Adame, Ron "Warshot" Smith, Dave Boe, Dan Nash, Joel Staggs, Jon Krupp, Ric Hedman, and many more. The full report by COB Dave Stoops follows. Thanks, all! 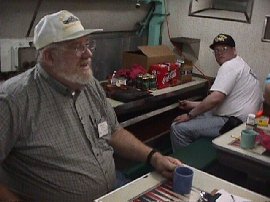 The Dallas Base USSVI have adopted the Fwd Torpedo Room and immediately went to work on it! What a fantastic job by all of them!

In addition, Dave Boe, Commander of the Dallas Base presented the Cavalla Preservation Fund a check for $244! Thank you for your generosity! Accompanying Dave were Jeff Morris, Marvin Koch, John McMichael, Jim Terrel, Joe Lee, George Bard, Joe Watson and son. There were a ton of women named Mary or Mary Mary or Mary Mary Mary, all from the Dallas base. (one might have thought they were all from West Virginia, and if you have to ask, forget it!) Dan Nash, from Chippewa Falls, Wisconsin immediately got to work on replacing the broken suction screen for the fan  in the conning tower which not only eliminated a serious safety hazard, but had to increase the total ventilation by removing the old screen which was approximately 40% clogged with some sort of substance which I swear was served for soupdowns in the old days!!!

Jim "Keg" Kerrigis replaced meter faces in a variety of places in maneuvering and control.

John Fredricks grouted the shower on the Stewart so that all the water will now go down the drain instead of standing in a corner to rust!

Robin "the Brat" continued to make the GDU a shinier place to shoot what the cooks could not palm off on the crew! (And she and her mom made a great breakfast on Sunday morning at Doc Beeghly's house!

Jon Krup dug post holes and installed not only a set of stairs for the berthing area on the Stewart, but gave us a good size platform there also! The guy was a one-man carpenter shop!

Many people gave a number of tours to visiting guests... Joel Staggs, when he wasn't fixing the bench seats in control was escorting all the young female tourists through the boat. Joel graciously agreed to take a large troop of girl scouts
through. Marv Koch kept a lot of the tourists in stitches and interested as he conducted his tours.

Danny Nash did a great job (for a nuke, hee hee) in showing people around a diesel boat! 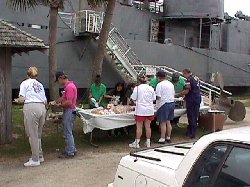 The COB should go in for a neurology exam....while he was playing macho man, he jumped the fence around the tank  and fell on his skinny a** and the following morning, while he was carrying the coffee pot from the wardroom to the crews mess lost his footing again and broke the coffee pot! I think that is almost a court martial offense!

Judy and Doc Beeghly did a FANTASTIC job in getting  everything organized, people registered, providing nametags, hospitality, setting up the catering...

Ric Hedman, when he wasn't busting his butt in one compartment or another made a parts run and brought back some more cleaning supplies also.

Roy and June Ator made sure that we had plenty of cold refreshments and hospitality! I'd also like to point out that ARCTIC ICE of Galveston provided the ice free when they found out what we were doing, so if you are down in the Galveston area, be sure you stop and tell them thanks. 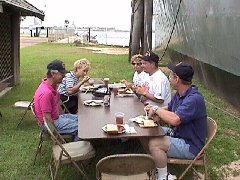 Gil Raynor's efforts paid off in that the Galveston Daily News showed up and took pictures. Doc has sent me the picture that appeared in today's paper and I will see about   getting it posted even though it has John McMichael's picture on it!!!

Jim Flanders and his radio crew from the Dallas area had both the Stewart and Cavalla strung up with so much
coax cable and antennas and had so many radio units with them you could have talked to anyone anywhere anytime and I think they did. They did get in contact with the USS DALLAS SSN 700 out in the MED.  Also he was talking to the artist that did the Fin Project in Seattle, but we did not know (then) that Ric Hedman set up the first website for that project and had talked with John Young many moons ago.....What a small world!

Neal made sure we had plenty of tables and chairs in time for the feed. 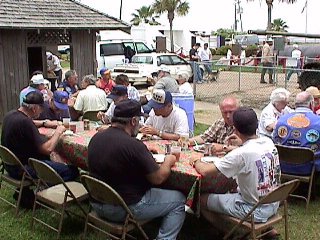 Sunday Ken Anderson of Heartland Videos came down and taped interviews with most all of the people there. He also said he would provide tapes to the Dallas Base for use in their speaking efforts to the Rotary clubs.

The Harmons, Paige and the mighty Steve, also worked in the FTR along with the Dallas Base USSVI

Friday evening, Wes Heinold, a safety professional with Phillips Chemical Company met us in the fwd battery, armed with atmosphere sampling equipment so we could make a safe tank entry to the fwd battery. We found that it was full---as full as it could be---of water. WE will get the water sampled  and probably pump it in the sewer....(Joel Staggs found a minnow in the wardroom so it must support life!) [Or was that one of the junior officers that got lost back in 1958???]

Actually, since the hams set up shop in the staterooms, we found there were water marks on the walls indicating that at sometime the compartment was full of water to the   level of the bottom of the watertight doors......hmmmm which hurricane was that and when???? I know that I am probably missing some people....I will plead CRS  but that is no excuse for missing the efforts of anyone that came down on his own time to give us desperately needed help. I apologize in advance.
Please let me know if I missed you..... 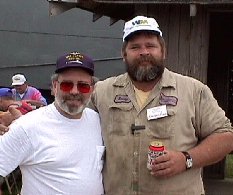 Again, I thank everyone for everything they did to make this  a great success. We had a number of generous contributions from many people and after we get the final numbers in, it looks like we will be able to turn in well over $400 to the Cavalla preservation fund!

I bombed Neal with email of all the digital pictures I had  taken and I don't know if he has finished downloading them, even after three days. I also needed to provide him with  names of the people in the pictures, so I expect that he will post some of them soon.  Neal does a hell of a job in getting the field day pictures  posted and keeping the Web Pages updated! Thanks, Neal!!!

Also, A special thanks to Roy Ator....since he posted the picture of me on the tank, the phone has not stopped ringing... I have had 56 proposals of marriage, 14 major manufacturers have asked me for endorsements, and the ARMY threatened to court-martial me for defacing their tank!@!!!!

What a great week-end, got a lot of work done and a whole lot of socializing, my many thanks to all who came and made it such a success, my special thanks, first and foremost, my wife for putting up with me for the past few weeks. 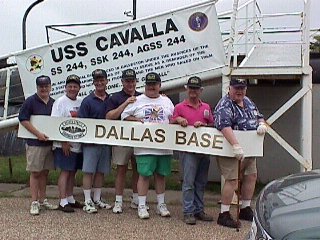 Then to Mamma Ator for her help in making those great   biscuits and gravy for our Sunday morning breakfast at my house, The Brat for doing the shopping and cooking the rest of breakfast, them were some great scrambled eggs and deer sausage, Roy Ator for providing the TV-VCR to view the videos.

The Dallas bunch (so many I can't name them all here) and there dedication in adopting the forward torpedo room and making it shine. Our house guests the brat and her family and the Bosekers, Skimmer Jon Krup from L.A. for building the steps to our berthing area for me (damn sturdy too and they won't float off very easy as they are buried in the ground).

Stoops our illustrious COB, Danny Nash, Jim Keg,and myself had to accompany Jon to receive his free meal at the Captains table. The Bosekers from Baltimore got two of the free meals at the table, Danny Nash from Wisconsin?, somewhere up there got one but donated it back to the restoration fund, and Ric Hedman from Seattle took Bilge Rat t-shirts instead. And again my many thanks to the 68 attendees who made our "First annual Cavalla Bash" such a great success.