The conning tower is a small, cylindrical pressure hull located in the sail above the control room. This was the boat's command center. During attack situations, the conning tower would be filled with as many as seven men. Here the captain could use the periscopes and plot attack angles, with his men working the TDC (Torpedo Data Computer), radar, and sonar. The men below in the control room would receive their orders through the open hatch.

The Cavalla's TDC was a wonder in its time. As the operator fed target speed, range, angles and the sub's bearing and speed in, this mechanical-electric "computer" could generate shooting solutions which could be checked for accuracy. The TDC would send relevant data to the torpedo rooms and feed the correct gyro setting directly into the torpedoes. American subs had the unique ability to fire torpedoes at extreme angles with deadly accuracy. 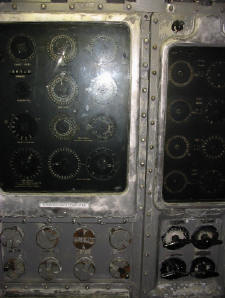 Moving forward in the boat, you enter the Officer's Wardroom.