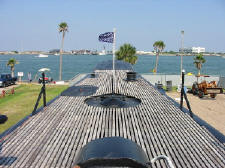 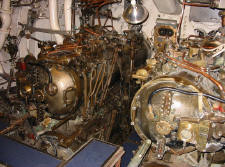 The business end of a submarine. Originally housing six 21-inch torpedo tubes, the Cavalla lost two tubes after the addition of her BQR-4 passive sonar gear.

The forward torpedo gang slept and lived among the "fish". There were 14 berths here (15 in the after torpedo room). Until some torpedoes were expended on targets, space was very tight. Extra fish were stored on racks and under the floor plates. The crew maintained the torpedoes, routinely checking all their components. When a target was marked, the order would be given to "flood the tubes", which meant opening a valve to let water fill the tubes. Then the outer doors would be opened. The torpedoes were fired from their tubes by six hundred psi of compressed air. Then the outer doors would be closed, the tubes drained, and the torpedo gang would furiously endeavor to reload the tubes--often the skipper would be anxiously awaiting the opportunity to shoot again.

Return to the Cavalla Tour