The USS Cavalla is assigned to the Texas Submarine Veterans of World War II. They have an agreement with the Galveston Park Board of Trustees whereby the Park Board maintains and manages the submarine. This works to the benefit of both, increasing tourism and adding cultural quality to the Houston-Galveston area, and maintaining a war memorial for the 52

There was talk that the submarine would be removed from Seawolf Park.

Neal Stevens, a concerned submarine and history buff, met with the director of the Park Board, Lou Muller, in June of 1998. Muller said they needed to do a lot of work on Cavalla but money was tight. He did give assurance that Galveston had not given up on Cavalla. "We have some funds earmarked for basic restorations" that would encompass her most pressing needs.

Then, on October 6, a copy of the meeting minutes revealed that the Galveston Park Board was taking steps to scrap Cavalla and make way for an RV park (read this report

During the Oct. 20 meeting, the Park Board suggested the Cavalla backers demonstrate some commitment and support from the vets and community. The Cavalla Website begin raising money for restoration through volunteer donations. After the meeting, the energized supporters outlined a plan to start an Internet pledge page, organize field days, write articles for the local papers, and create a set of historical displays covering the history of Cavalla. The local SUBVETS vowed to become active and aggressive. WWII Subvet Ron Smith organized a "Save the Cavalla" Rally. Neal Stevens wrote an essay (Scrapping the Cavalla like demolishing the Alamo) that was published in the Editorial section of the Houston Chronicle and caught the eye of local philanthropist George Strake.

Capt. Alford, former commander of two nuclear submarines, gave the keynote speech at the first Cavalla Rally. Through the direct involvement of Park Board Assistant Director Renée Adame, the Cavalla Historical Foundation was formed. The group enlisted retired Naval Captain Zeb Alford as their spokesman. Field days have attracted volunteers from Dallas, Minnesota, California, and Louisiana. The Sea Cadets junior naval league has volunteered time and service. Seawolf Park is now the scene of a sleep-over program for the first time ever. The volunteers have raised over $30,000 from individuals, with most donations under $30. All-Crews Cavalla Reunions were held in 2000, 2002, and another is scheduled for April 2004.

The Galveston Park Board has responded to this resurgence of interest in Texas’ only memorial submarine by voting to commit $50,000 towards the replacement of the deck. In addition, the Park Board responded to the request to increase spending on the submarine display by earmarking 50% of the gate receipts for maintenance.

Perhaps the biggest stroke of luck has been the hiring of Master Chief Petty Officer John McMichael USN, (ret.) as full time curator. Progress has taken a huge upswing under his experienced hand.

Enthusiasm between the Park Board and the volunteers is growing as they align their goals. The objective: to make Cavalla a memorial Texas can be proud of. 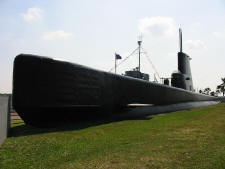 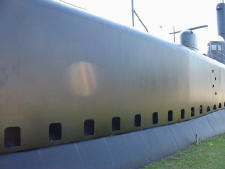 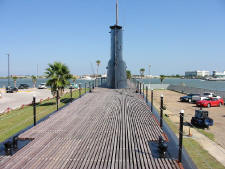 Saving Cavalla is a big job. Want to join us?

Pitch in a few dollars: CAVALLA PLEDGE PAGE
Come out and polish some brass: CAVALLA FIELD DAYS
Contact us, clickHERE!