The control room, the center of operations. Many of the main controls and instruments are located here, such as the systems for diving and surfacing. Levers at the hydraulic manifold (right side of photo) controlled the vents at the tops of the ballast tanks; when opened, the vents allowed air to escape, to be replaced by tons of seawater rushing in through flood ports in the bottom of the ballast tanks. Above the hydraulic manifold was the "Christmas tree," (upper right) a panel of red and green lights that displayed the status of every hull opening. Green all around meant all openings were secure and the boat was ready to dive. 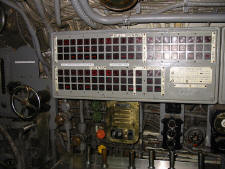 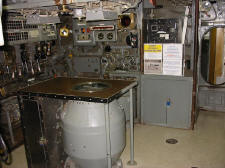 The trim manifold is located here. This controlled the amount of water in the trim tanks needed to keep the boat level. The air manifold regulated the high pressure air used to empty the tanks when surfacing. In the center of the control room was a chart table, which housed the gyrocompass. The ladder leading up to the conning tower can be seen behind the chart table. Below the control room, the pump room was filled with machinery for the compressed-air, hydraulic refrigeration, and air-conditioning systems. After Cavalla was converted to the "Hunter-Killer" SSK class, some of this equipment was relocated to the forward engine room to make space for sonar gear. 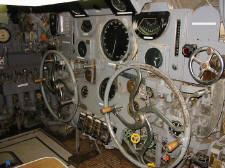 The two large wheels control the bow and stern planes with hydraulic assistance, which changed or maintained depth. During combat conditions, the two planesmen were saddled with the critical task of maintaining depth at periscope level. Failure to hold the boat at depth could result in exposure and detection, thus giving away a submarine's greatest asset--stealth. The large gauge in the center is the depth gauge, which was the focal point of a planesman's universe.


Moving forward in the boat, you enter the Conning Tower